Hallmark announces its first visit to New York Comic Con at the Javits Center (Oct. 13-16), the East Coast’s biggest popular culture convention. Attendees will have access to Comic Con-exclusive Hallmark Keepsake Ornaments and receive a sneak peek of product for 2012.

During the convention, Hallmark will sell limited quantities of the following Keepsake Ornaments: 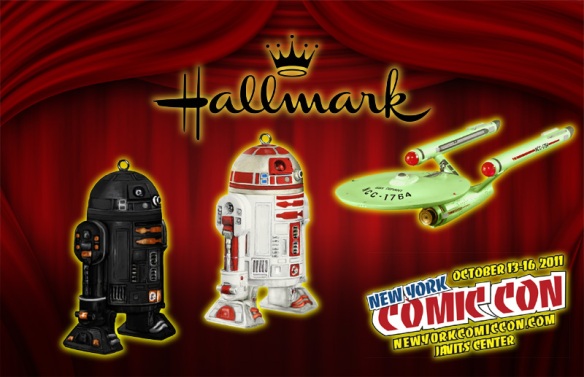 “We are excited to participate for the first time in New York Comic Con,” said Beth Dorr, associate product manager for Keepsake Ornaments. “The convention gives us a great opportunity to meet and interact with more of our most passionate fans who can’t travel to the West Coast and reward them with exclusive opportunities and sneak peeks.”

Visitors to the Hallmark booth 110 will receive a series of collectible buttons featuring quotes from the new line of Star Wars Gifts coming exclusively to Hallmark Gold Crown stores spring of 2012. A different design in the series will be given away each day of the convention in limited quantities.

Other activities include visits from Star Wars characters courtesy of the 501st Legion, a sneak peek of Hallmark’s Star Wars products planned for 2012 and fun giveaways.