Besides being America’s biggest comic convention, Comic-Con International: San Diego has become ground zero for publishers to premiere special, exclusive editions of their products to legions of dedicated fans. Without further ado, here are the offerings that will be available from IDW Publishing! 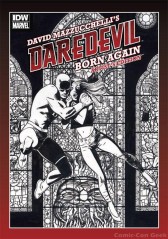 Some of the titles below will be available for pre-order from IDW’s Web store beginning June 22nd. Fans who preorder will be able to pick up their books from the IDW booth at Comic-Con.

A limited edition of the hotly anticipated Daredevil: Born Again Artist’s Edition will be on hand. Packaged in a deluxe slipcase, signed, numbered, and featuring a variant cover of David Mazzucchelli’s historic artwork, this edition will be limited to 250 copies and priced at $200. It will be available for pre-order from IDW’s Web store.

Speaking of Artist’s Editions, an exclusive version of Sergio Aragonés’ Groo The Wanderer: Artist’s Edition will be premiered at Comic-Con as well! Signed, numbered, and limited to 250 copies, this edition will feature a variant cover and be priced at $150. This title will be available for pre-order from IDW’s Web store.

A special convention-exclusive edition of Parker: The Score by Darwyn Cooke will also be available, featuring a variant dust jacket and numbered signature plate that is signed and numbered by Darwyn! This edition is limited to just 175 copies, priced at $60, and will only be available at IDW’s booth.

For Teenage Mutant Ninja Turtles fans, IDW has a special surprise! For this convention only, IDW is producing a very special set of TMNT Ultimate Collection Volumes 1-3 Deluxe Slipcase. The three volumes will come in a deluxe, full-color slipcase. Priced at $200, there will only be 40 of the black-and-white-cover convention-exclusive editions! These sets will be available for preorder through IDW’s Web store.

An exclusive hardcover edition of Locke & Key Volume 5: Clockworks will be available as well. This full-color hardcover will be priced at $30 and limited to 300 copies available only at IDW’s booth.

For the hardcore LOCKE & KEY fans, IDW will also have limited quantities of new, high-quality pewter key replicas! 200 “Legacy Edition” OMEGA KEYS and GHOST KEYS and 50 copies of the WHISPERING IRON will be available for $25 each, only at IDW’s booth.

Ashley Wood and his incredible robotic concern ThreeA will be a part of IDW’s booth with exclusives in tow! Ash and company will be bringing along the first-ever ZOMB toy, a zombified departure from his famous robots, but in his inimitable style! The ZOMB toy will be blind-boxed, meaning which ZOMB is in the box is a mystery! The ZOMBS will be priced at $100, limited to 250 pieces, and available for pre-order through the exclusive ZOMB pre-order site!

In conjunction with Ash’s presence in the IDW booth, two deluxe hardcover collections will be available as well! Limited to 500 copies each and priced at $75 and $50 respectively, the complete LORE and ZOMBIES VS. ROBOTS will be available for pre-order through IDW’s Web store.

Joe Jusko fans, pay attention! A special convention-exclusive variant edition of THE ART OF JOE JUSKO will be available at the IDW booth! Limited to just 100 copies and signed and numbered with a variant cover, this edition will be priced at $100 and only available at the show.

Fans of powerhouse creator Amanda Conner can also rejoice, as there will be an exclusive variant edition of THE ART OF AMANDA CONNER priced at $60 and available for pre-order from IDW’s Web store. Additionally, Amanda will be signing at the IDW booth throughout the show! It’s a perfect opportunity for fans to get their new exclusive book signed.

For the many sketch-seekers at Comic-Con, this year IDW will have their very own branded sketchbooks! Priced at $20, these hardcover books are full of high-quality art paper that fans will treasure for years once they’ve been filled with drawings by their favorite artists. Additionally, each fan that purchases a sketchbook will be entered to win a mystery sketchbook with a selection of drawings from several of the artists that will be at the IDW booth during the show!

IDW will also be bringing along some exclusive single-issue comics priced at $5 each:

In addition to the surprises in store for fans at IDW’s many convention panels, these exclusives should go a long way toward cementing another excellent year at San Diego Comic-Con in IDW’s history!

Visit IDWPublishing.com to learn more about the company and its top-selling books. IDW can also be found at http://www.facebook.com/#!/idwpublishing and http://tumblr.idwpublishing.com/ and on Twitter at @idwpublishing.

About IDW Publishing
IDW is an award-winning publisher of comic books, graphic novels and trade paperbacks, based in San Diego, California. Renowned for its diverse catalog of licensed and independent titles, IDW publishes some of the most successful and popular titles in the industry, including: Hasbro’s The TRANSFORMERS and G.I. JOE, Paramount’s Star Trek; HBO’s True Blood; the BBC’s DOCTOR WHO; Nickelodeon’s Teenage Mutant Ninja Turtles; Toho’s Godzilla; Wizards of the Coast’s Magic: The Gathering and Dungeons & Dragons; and the Eisner-Award winning Locke & Key series, created by best-selling author Joe Hill and artist Gabriel Rodriguez. IDW is also home to the Library of American Comics imprint, which publishes classic comic reprints, and Yoe! Books, a partnership with Yoe! Studio.

IDW’s critically and fan-acclaimed series are continually moving into new mediums. Currently, Jerry Bruckheimer Films and Disney are creating a feature film based on World War Robot, while Michael Bay‘s Platinum Dunes and Sony are bringing Zombies vs. Robots to film.