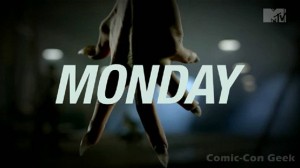 The action-packed second season of MTV‘s Teen Wolf will come to a close with the gripping season finale, airing Monday, August 13 at 10:00p.m. ET/PT. Kicking the night off at 8:00p.m., the two previous week’s nail-biting episodes will air back-to-back, leading up to the big event. Immediately following the season finale at 11:00p.m., Teen Wolf: Revelations will bring the stars together on one stage to discuss the epic season, share behind the scenes moments, and give never-before-seen glimpses into their characters.

In Monday night’s season finale, the aftermath of a shocking death on the lacrosse field, forces Scott and his friends to rush to figure out Gerard’s master plan. Meanwhile, Derek plots to take him down using his own methods. Luckily, fans don’t have to wait for the full moon, and can click HERE for a sneak peek.

As season two comes to an end, fans can look forward to a super-sized season three, featuring 24-episodes. As production gets underway later this year, viewers wanting the latest Teen Wolf season three intel can follow the show on Facebook for behind-the-scene access.

For exclusive clips and more, visit the Teen Wolf show page on mtv.com. Join the conversation with the Teen Wolf community by following the show on Twitter @MTVTeenWolf, like it on Facebook.

The pilot was written by Jeff Davis and Jeph Loeb & Matthew Weisman and directed by Russell Mulcahy. The Teen Wolf series is based on a Screenplay by Jeph Loeb & Matthew Weisman. Justin Levy, Julie Schwachenwald, Anne Marie McGintee and Dana Gotlieb-Carter, are the MTV executives in charge of production. The series is a co-production with MGM, in association with Lost Marbles Productions, Inc., First Cause, Inc. and DiGa.

MTV is the world’s premier youth entertainment brand. With a global reach of more than a half-billion households, MTV is the cultural home of the millennial generation, music fans and artists, and a pioneer in creating innovative programming for young people. MTV reflects and creates pop culture with its Emmy(R), Grammy(R) and Peabody(R) award-winning content built around compelling storytelling, music discovery and activism across TV, online and mobile. MTV’s sibling networks MTV2 and mtvU each deliver unparalleled customized content for young males, music fans and college students, and its online hub MTV.com is a leading destination for music, news and pop culture. MTV is a unit of Viacom Inc. (NASDAQ: VIA, VIAB), one of the world’s leading creators of programming and content across all media platforms.