Great info for those wanting to see how much one should save up for a trip to Comic-Con!

Trust me, it’ll save you a lot of stress in the long run. The last thing you’re going to want to be thinking about when you get to the con is how much money you can’t spend because you haven’t properly budgeted up to this point. The rest of the Nerdophiles staff drove to Comic Con this year, but I’m from Maryland and I had to fly in – making for some unique challenges and some unique considerations when budgeting. I’m breaking down my expenses, so that you can better think about and plan for your own. After all, we’re less than a year away from San Diego Comic Con 2014!

The first thing you need to start your San Diego Comic Con adventure is your badge. If you were lucky enough to snag…

The Legend of Korra has been picked up for a second season of 26 episodes. Season One Book 1 concluded a few weeks ago and is now ready for Book 2. Book 2 is being called “Spirit” and takes place 6 months after Book 1. Season Two should also be split up as Book 3 and 4 as was confirmed by the creator, Bryan Konietzko.

The Legend of Korra stars the voices of Janet Varney who plays Korra, J.K. Simmons (The Closer), P.J. Byrne (Horrible Bosses), David Faustino (Married… with Children), Kiernan Shipka (Mad Men) and Seychelle Gabriel (Falling Skies). The show will resume in 2013 on Nickelodeon. The Legend of Korra is written and produced by Avatar: The Last Airbender creators Michael DiMartino and Bryan Konietzko.

*Please Note: All items herein are subject to change.

The Power Rangers are back on Nicktoons with another season out of the massive franchise library. Last time, we went into the jungle for the source of the Power Rangers’ strength. This time we tap into the power of Dinosaurs! We will present the entire season of Power Rangers Dino Thunder over 48 hours beginning on Friday, January 6th at 7pm.

Where Dragon Ball Z Kai ends, Dragon Ball GT rises to take its place as the next installment in this wonderful franchise. Dragon Ball GT launches with a two and a half hour movie premiere on MLK Day, followed by premieres every Wednesday and Thursday throughout the rest of the month. 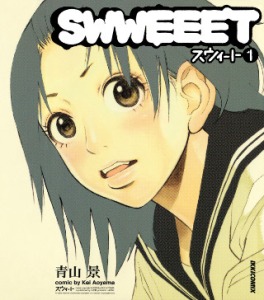 News has been circulating that Manga-ka, Aoyama Kei (32), was found dead in his apartment in Komae-city, Tokyo on October 9th. According to the Metropolitan Police Department’s Chofu police station, they did not find any traditional suicide note. On October 6th, Aoyama tweeted 「まあ、やり残したことや、やりたかった夢などはいっぱい残ってはいるけど、「思い残すこと」はあまりないのだ。僕は、僕が生きた３２年

に、結構満足しているのだ。」which translates to “Well, I have much left to do and much I dreamed of doing, but I hardly have any regrets. I am content with the 32 year I have lived.” The police are investigating this as a possible suicide because of the tweet.

On October 9th at approximately 9pm, the police received a 110 call from a source from the Japanese publisher Kodansha who said “We haven’t been able to contact Mr. Aoyama.” The police rushed to Aoyama’s apartment and found him in his bathroom. There was no noticeable physical trauma or wounds, or any signs of forced entry.

Aoyama was serializing his manga “Yoiko no Mokushiroku” in Kodansha‘s Evening magazine. He was also the creator or artist of the manga SWWEEET in Shogakukan’s Monthly Ikki magazine, China Girl, and Strobe Light.

Condolences to his family, friends and fans.

This summer, G4 and Marvel team up to bring fans a whole new way to see their favorite Super Heroes with the premiere of two original Marvel anime series, “Iron Man” and “Wolverine.”  The eagerly anticipated series will air exclusively on G4 with twelve half-hour weekly episodes that include interconnecting storylines and cameo appearances by several popular Marvel characters. G4 viewers can be part of all the action when “Iron Man” premieres on Friday July 29th at 11pm ET/PT followed by “Wolverine” at 11:30pm ET/PT and will air weekly Fridays from 11:00-Midnight ET/PT. With epic battles, action-packed storylines and mind-blowing animation, these series star some of the most popular Super Hero comic book characters of all time. And for more intense action, two new Marvel anime series—X-Men and Blade—will premiere later this year, exclusively on G4.

“Iron Man”
In an effort to make amends for his past in weapons manufacturing, Tony Stark has dedicated himself to building the world up rather than tearing it down. Traveling to Japan to build a new arc reactor that will deliver unlimited free energy to the Japanese people, Stark is challenged by the Japanese government and the media when he attempts to import the necessary nuclear priming device.  When the nuclear reactor is repeatedly attacked by the mysterious Zodiac consortium, Stark must gather his allies to take on Zodiac and its mastermind.

“Wolverine”
Based on the popular graphic novel by Chris Claremont and Frank Miller, the series begins when Mariko, the love of Logan’s life, is forced back to Japan by her crime-lord father, Shingen. Logan vows to get her back at any cost. He is plunged into a chaotic world of corruption and violence, forcing him to team up with young assassin, Yukio, to battle their way through the Japanese criminal underworld.
For more information, visit http://www.g4tv.com/marvel
The “Iron Man” and “Wolverine” anime series are produced by Madhouse, Marvel Entertainment and Sony Pictures Entertainment Japan. Sony Pictures Television is the distributor. 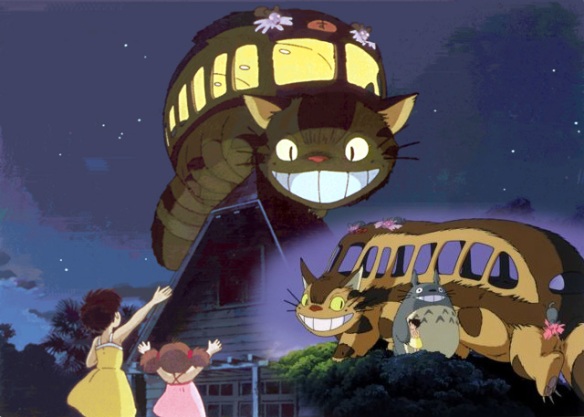 The Ghibli Museum in Mitaka, Japan will be unveiling a new exhibition June 4th, “Nekobus kara Mita Fūkei-ten,” re-creating the famous backgrounds from Studio Ghibli Films. One of the re-creations is the NekoBus from Hayao Miyasaki’s My Neighbor Totoro!

A large plush catbus is already on display, but it is child-sized. Only children are allowed to enter and play in it. It is filled with lots of black “dust bunnies” or Makuro Kurosuke from the anime. The new exhibit will have an adult-sized Cat Bus! From the inside, visitors can see the re-creation of the natural landscape seen in My Neighbor Totoro.

You can then leave the Cat Bus and enter the second exhibit which will re-create the antique shop from Whisper of the Heart. The room also has the hat shop from Howl’s Moving Castle, the forest from Princess Mononoke and the restaurant scene from Spirited Away. 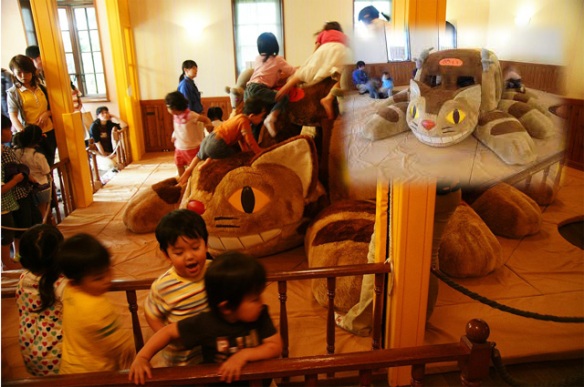 Museum hours are from 10am-6pm, while the Straw Hat Cafe hours are from 11am-7pm. It is closed on Tuesdays. You must buy a ticket from Lawson Ticket and are only available in Japan. Ticket availability is limited and there are no refunds. Entrance to the Ghibli Museum is strictly by advance purchase of a reserved ticket which specifies the appointed date and time of the reservation (10am, 12pm, 2pm & 4pm). It seems that the tickets are only valid until 30 minutes after your scheduled entry time. Ticket prices are as follows, Adults are 1000 Yen, Kids 13-18 are 700 Yen, 7-12 are 400 Yen, 4-6 are 100 Yen, and under 4 are free. One last thing, the exhibit goes through May 2012 according to Cinema Today.

Whew! Lots of rules to follow there! Once you get past the rules it should be lots of fun right? LOL! 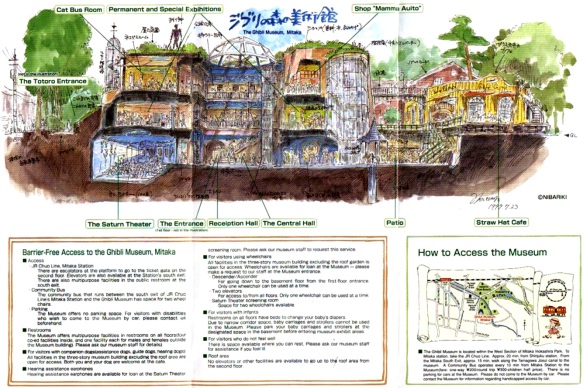