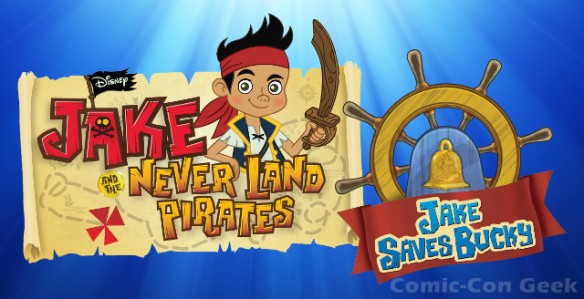 Disney Junior will debut the primetime special Jake and the Never Land Pirates: Jake Saves Bucky on International Talk Like A Pirate Day, WEDNESDAY, SEPTEMBER 19 (7:00-8:00 p.m., ET/PT) on Disney Channel. In the family night special event episode, Peter Pan returns to Never Land once again to help Jake and his crew win back their ship after losing Bucky in a race against Captain Hook and the Jolly Roger. The series’ first primetime special, Jake and the Never Land Pirates: Peter Pan Returns, debuted in February 2012 and was the most-watched cable telecast in nearly 10 years in Kids 2-5.

Beginning Friday, August 31, DisneyJunior.com/JakeSavesBucky will launch Jake’s Heroic Race, a collection of four mini-games themed to the primetime special, as well as a pirate name generator where kids will be presented with various scenarios and then assigned a pirate name based on their unique responses. New printable coloring pages will depict Jake demonstrating his heroic characteristics including bravery, confidence, kindness, loyalty and helpfulness.

Jake and the Never Land Pirates: Jake Saves Bucky stars the voices of Colin Ford as Jake; Madison Pettis as Izzy; Jonathan Morgan Heit as Cubby; David Arquette as Skully; Corey Burton as Captain Hook; Jeff Bennett as Mr. Smee and Bones; Loren Hoskins as Sharky; Adam Wylie as Peter Pan; Dee Bradley Baker as Brightly and the Dragon; and Russi Taylor as Gilly. Rob LaDuca is executive producer, Mark Seidenberg is producer/story editor and Howy Parkins is the director. The special is a production of Disney Television Animation.

Jake and the Never Land Pirates is a music-filled interactive treasure hunt that revolves around a crew of kid pirates – leader Jake and pals Izzy and Cubby – and follows their Never Land adventures as they work to outwit two infamous characters, the one and only Captain Hook and Mr. Smee, from Disney’s classic Peter Pan. The series, which emphasizes teamwork, features original pirate rock music performed by Sharky and Bones of The Never Land Pirate Band.

Disney Junior reflects the emotional connection generations of consumers have to Disney storytelling and Disney characters, both classic and contemporary. It invites mom and dad to join their child in the Disney experience of magical, musical and heartfelt stories and characters, while incorporating specific learning and development themes designed for kids age 2-7. Disney Junior’s series blend Disney’s unparalleled storytelling and characters kids love deeply with learning, including early math, language skills, healthy eating and lifestyles, and social skills. Disney Junior launched in February 2011 with a daily programming block on Disney Channel. In its first year, Disney Junior posted the network’s biggest yearly audience in the daypart in Total Viewers, Kids 2-5, Boys 2-5 and Women 18-49, increasing by double-digit margins among preschooler demographics over year-ago levels. On March 23, 2012 Disney Junior added a cable and satellite channel in the U.S. bringing the total number of channels to 30 worldwide. 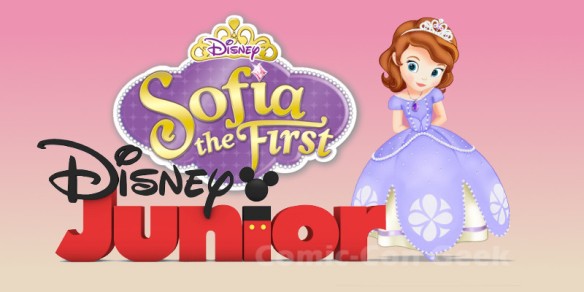 Disney will introduce a little girl princess to its celebrated legacy of princess fairytales in an animated television movie and series, Sofia the First, premiering in fall 2012 and spring 2013 respectively, on Disney Channel and Disney Junior channels around the world. While Disney princess fairytales have been enchanting audiences for more than 70 years, this is the first time a series has centered on a princess as a little girl. The stories are designed to communicate positive messages and life lessons that are applicable to preschool-aged children. The series and movie are productions of Disney Television Animation.

Sofia the First stories are set in the storybook world of young Sofia who starts out life as a regular girl. But when her mom marries the king, she is whisked off to a glamorous, but sometimes confusing, castle world of royalty, pomp and new step-siblings, Amber and James. Sofia the First will include appearances by Fauna, Flora and Merryweather (fairies seen in Disney’s classic Sleeping Beauty) as the headmistresses of Royal Prep, the academy that Sofia, along with other princes and princesses, attends. Special event appearances will be made by classic characters including Cinderella and other Disney Princesses.

In announcing the series, Nancy Kanter, Senior Vice President, Original Programming and General Manager, Disney Junior Worldwide, said, “In Sofia, we have a ‘peer to peer princess,’ a relatable girl experiencing the same social issues as our young viewers – learning how to fit in, making new friends, conquering new skills and building sibling relationships.” She continued, “Although Sofia will have plenty of pretty dresses and sparkly shoes, our stories will show Sofia, and our viewers, that what makes a real princess is what’s inside, not what’s outside. That the inner character of kindness, generosity, loyalty, honesty and grace make you special, not the dress you wear.”

Providing the voice of Sofia is Ariel Winter (ABC’s “Modern Family”). Also highlighting the voice cast is Sara Ramirez (ABC’s “Grey’s Anatomy”) as Queen Miranda; Wayne Brady (“Whose Line Is It Anyway?) as Clover, a wise-talking Rabbit; and Tim Gunn (ABC’s “The Revolution,” “Project Runway”) as Baileywick, the family’s Royal Steward. The actors providing the voices of King Roland, Amber and James will be announced soon.

The Disney Junior programming block on Disney Channel reflects the emotional connection generations of consumers have to Disney storytelling and Disney characters, both classic and contemporary. It invites mom and dad to join their child in the Disney experience of magical, musical and heartfelt stories and characters, while incorporating specific learning and development themes designed for kids age 2-7. Disney Junior’s animated and live action series blend Disney’s unparalleled storytelling and characters kids love deeply with learning, including early math, language skills, healthy eating and lifestyles, and social skills. Disney Junior is available on basic cable in more than 99 million U.S. homes (via a daily block on Disney Channel) and to millions of other viewers on 28 Disney Junior channels and free-to-air broadcast partners around the world. It is also seen via subscription video-on-demand and a broadband website, DisneyJunior.com. In 2012 Disney Junior will add a basic cable and satellite channel in the U.S. 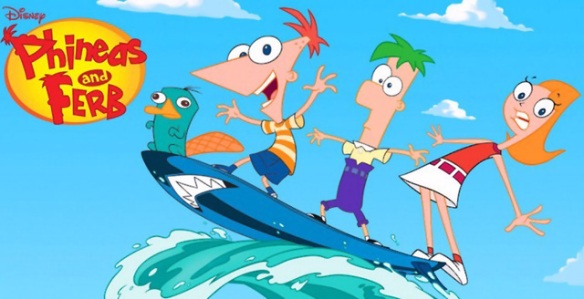 “Phineas and Ferb” leads the charge for Disney Channel at Comic-Con International, as “Perry the Platy-bus On Tour” arrives on the show floor in celebration of the Emmy Award-winning series. After making its debut in Times Square on July 11, the Platy-bus will ride into San Diego Comic-Con JULY 21-24. This incredible, 4000-pound customized Airstream trailer comes complete with bill, tail and googly eyes inspired by Phineas and Ferb’s teal-colored pet platypus, Perry. The event marks a banner year ahead for the franchise, which is set for the fall debut of the Disney Channel Original Movie (DCOM), “Phineas and Ferb: Across the 2nd Dimension.” The Platy-bus officially opens for a three-hour preview night on Wednesday, July 20.

Fans who visit the “Phineas and Ferb-Disney Channel/DisneyXD” booth will be able to play the upcoming video game inspired by the DCOM on the Wii or Nintendo DS family of handheld systems, the Unity3D online game, which will also be available on www.DisneyChannel.com/2D, “The Movie Game: The Dimension of Doooom!” and sing Perry-oke. In addition, Disney will offer premium giveaways and a collection of four Comic-Con exclusive “Phineas and Ferb” figurines and one mystery figure from Jakks Pacific for purchase.

The “Phineas and Ferb-Disney Channel/Disney XD” spectacular showcase spans 25×60 feet and will be located immediately opposite the main entrance on the convention floor. 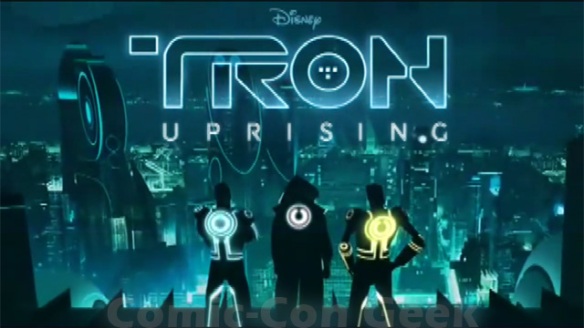 A special sneak preview of the Disney Channel Original Movie sponsored by Time Warner Cable, “Phineas and Ferb: Across the 2nd Dimension,” will take place Saturday, July 23, with a Q&A with Dan Povenmire and Swampy Marsh following the screening. Additional details will be available soon.

In this animated Disney Channel Original Movie adventure based on the Emmy Award-winning comedy series “Phineas and Ferb,” stepbrothers Phineas and Ferb go on their biggest journey yet, into another dimension! When the boys finally discover that their beloved pet platypus Perry is in fact a secret agent who battles the forces of evil daily, they join him on a grand adventure that blasts them to another dimension, where a truly evil Dr. Doofenshmirtz has taken over an alternate Tri-state Area. When they uncover his ploy to travel back to their dimension to take over their Tri-state Area, the gang, as well as their alter-egos, must band together to stop him.

Disney Channel is a 24-hour kid-driven, family inclusive television network that taps into the world of kids and families through original series and movies. It is currently available on basic cable in over 99 million U.S. homes and to millions of other viewers on Disney Channels around the world. Disney XD is a basic cable channel and multi-platform brand for Kids age 6-14, hyper-targeting boys and their quest for discovery, accomplishment, sports, adventure and humor. In the U.S., Disney XD is seen on a 24-hour, advertiser supported network that reaches over 77 million households via its basic cable affiliates. Disney XD channels are in the UK, France, Spain, Denmark, Sweden, Norway, Poland, Greece, Turkey, Latin America and Japan. Disney Channel and Disney XD are part of the Disney/ABC Television Group.

Error: Twitter did not respond. Please wait a few minutes and refresh this page.