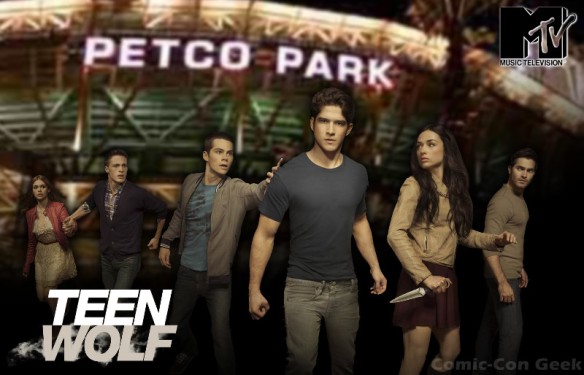 MTV will be geeking out from Comic-Con International in San Diego all weekend long, beginning on Thursday, July 18 with the highly-anticipated return of a Teen Wolf panel featuring all five series regulars and new cast members who play the twin Alpha werewolves, Max and Charlie Carver. Additionally, the network, along with MTV2, MTV News and MTV Geek will be on the ground at Petco Park, home of the San Diego Padres, for the first-ever MTV2 Party in the Park. Open to all Comic-Con badge holders, the July 18 event celebrating the die-hard fans in attendance at Comic-Con will feature live music performances, free food and drinks and the taping of Guy Code Honors, a one-hour special starring the casts of Teen Wolf and MTV2’s Guy Code that premieres Sunday, July 21 at 8:00 p.m. ET/PT on MTV and MTV2.

The complete schedule for MTV Geekend on-air programming will include the following:

The complete schedule for on-the-ground events during MTV Geekend at Comic-Con will include the following:

Teen Wolf was developed by Jeff Davis (creator, Criminal Minds) who also serves as executive producer.  Additional executive producers include Russell Mulcahy (Highlander, Resident Evil: Extinction), Marty Adelstein (Prison Break), René Echevarria (Medium, Castle), Tony DiSanto and Liz Gateley.  The pilot was written by Jeff Davis and Jeph Loeb & Matthew Weisman and directed by Russell Mulcahy.  The Teen Wolf series is based on a Screenplay by Jeph Loeb & Matthew Weisman.  Justin Levy is the MTV executives in charge of production.  The series is a co-production with, and distributed by, MGM, in association with Lost Marbles Productions, Inc., First Cause, Inc. and DiGa.

About MTV
MTV is the world’s premier youth entertainment brand. With a global reach of more than a half-billion households, MTV is the cultural home of the millennial generation, music fans and artists, and a pioneer in creating innovative programming for young people. MTV reflects and creates pop culture with its Emmy®, Grammy® and Peabody® award-winning content built around compelling storytelling, music discovery and activism across TV, online and mobile. MTV’s sibling networks MTV2 and mtvU each deliver unparalleled customized content for young males, music fans and college students, and its online hub MTV.com is a leading destination for music, news and pop culture. MTV is a unit of Viacom Inc. (NASDAQ: VIAB, VIA), one of the world’s leading creators of programming and content across all media platforms. For more information, go to http://www.mtvpress.com.

About MTV2
Available in approximately 80 million homes MTV2 is man’s best friend. Since its launch in 1996, the network has reflected the subversive interests and behaviors of young men with a compelling and diverse programming line-up inspired by ordinary guys who do extraordinary things.  MTV2 is a unit of Viacom Inc. (NASDAQ: VIA, VIAB), one of the world’s leading creators of programming and content across all media platforms.  For more information, go to www.mtvpress.com or follow us on Twitter @MTVPress.

Star of NBC’s Chuck, voice actor for “Fallout: New Vegas” and “Halo: Reach,” owner of the nerd culture site www.TheNerdMachine.com and video game super fan, Zachary Levi will host Spike TV’s 2011 “Video Game Awards” (#VGA). Telecasting from Los Angeles, CA and featuring some of the most notable names in video games, Hollywood, music, sports and more, the two-hour event honoring the outstanding achievements within the video game industry over the past year will premiere LIVE on Spike TV, MTV2 and Spike.com on Saturday, December 10 at 8:00 PM ET/5:00 PM PT.

“Zac Levi is an avid gamer who is truly a part of gaming culture and understands the fans,” says Casey Patterson, Executive Producer and Executive Vice President, Event Production, Talent & Studio Relations for Viacom Entertainment Group. “He has great ideas about this year’s show. Zac is all about honoring the year in gaming and ushering in the future by showcasing massive world premieres at this year’s event. We’re excited to be working with Zac.”

Audience members and viewers will also be treated to a live performance by Grammy Award recording artists The Black Keys, who will perform their video game hit, “Lonely Boy,” and the duration of the festivities will feature Grammy nominee and dance music innovator deadmau5, who will transform the show with his visual representation of sound into a real life video game experience.

Among the list of presenters and attendees are Sports Illustrated cover model and star of Battleship Brooklyn Decker, Family Guy star and voice of Joker in the “Mass Effect” series Seth Green, cast members of Workaholics Blake Anderson, Adam Devine and Anders Holm, multiplatinum and Grammy Award-winning recording artist LL Cool J, stars of the upcoming American Reunion Jason Biggs and Seann William Scott, the most prolific quarterback and wide receiver combination in NFL history, Hall of Famers Joe Montana and Jerry Rice, and many more to be announced shortly.

This year, Spike TV will be bestowing the Gamer God Award upon the three founders of Blizzard Entertainment for their immense contributions to the electronic gaming medium. Creators of the “World of Warcraft,” “Starcraft” and “Diablo” entertainment universes, Blizzard is celebrating its 20th anniversary – as well as the 15th anniversary of “Diablo” – in 2011. Co-founders Michael Morhaime, Allen Adham, and Frank Pearce will accept the award and treat Blizzard’s global community to the full never-before-seen opening cinematic of the company’s upcoming release, “Diablo III.”

The talent joins the already announced never-before-seen world premieres of the most anticipated games of 2012 and beyond, including BioWare‘s next project, the next “Alan Wake” game and “Metal Gear Solid: Rising,” “Tom Clancy’s Rainbow 6 Patriots,” “Transformers: Fall of Cybertron,” and Most Anticipated Game nominee, “BioShock Infinite” as part this year’s “VGA” festivities.

For additional information about other “VGA” world exclusives and announcements, fans can log onto VGA.spike.com and get updates via Twitter @SPIKE_TV, as well as the hashtag #VGA.

Leading the way with 12 nominations at the 2011 “VGAs” is “Portal 2” by Valve. Rocksteady Studios‘ second adventure featuring the Dark Knight, “Batman: Arkham City” garnered 10 nominations, while the third chapter in the Nathan Drake adventure, “Uncharted 3: Drake’s Deception” by Naughty Dog and independent game “Bastion” rounded out the top most- nominated games with 9 and 5 nods each, respectively.

Nominees for Spike TV’s 2011 “Video Game Awards” were determined by the VGA Advisory Council, made up of a group of some of the most well-respected video game journalists from media outlets including Entertainment Weekly, USA Today, Game Informer Magazine, Kotaku, Joystiq, GameSpot, IGN and WIRED.

For the first time, Viacom Media Networks will broaden the reach and impact of the 2011 “VGAs” by simultaneously airing the show LIVE on both Spike TV and MTV2, as well as on Spike.com. Internationally, the “VGAs” will air in over 100 countries and territories around the world.

Spike TV is available in 99.8 million homes and is a division of Viacom Entertainment Group. A unit of Viacom (NYSE: VIA, VIA.B), MTV Networks is one of the world’s leading creators of programming and content across all media platforms. Spike TV’s Internet address is http://www.spike.com.

Studio of the Year

Best Performance By a Human Male

GameTrailers.com Trailer of the Year

Best Song In A Game

Game of the Year