Jerry Bruckheimer will be up on Twitter live @BruckheimerJB on TUESDAY, AUGUST 2 from 9:00-10:00 p.m., ET and PT, during the series premiere of Take the Money & Run, hosting a live chat on ABC.com to offer commentary on the exciting action taking place, behind-the-scenes anecdotes and exclusive photos.

Prior to this live chat, fans can also submit questions on http://abc.go.com/shows/take-the-money-and-run/ask-jerry-bruckheimer or tweet their questions #JerryChat.

On Tuesday night’s episode, brothers Raul & Paul Bustamante in San Francisco are given one hour to hide a briefcase worth $100,000. Once that time is up, they’re taken into custody by local police detectives Cliff Cook & Dean Taylor and brought to investigative headquarters. Over the next 48 hours, the detectives will work with professional interrogators – Detective Paul Bishop and Deputy District Attorney/best-selling author Mary Hanlon Stone – to combine efforts and determine the location of the briefcase. All they’ll have to go on are cell phone records, any receipts and the GPS coordinates from the players’ car. The rest will be learned from two days and nights of grueling interrogations and extensive field work. If the two detectives are able to locate the briefcase within the 48 hours, they’ll get to keep the money. If not, the two players will keep the $100,000. 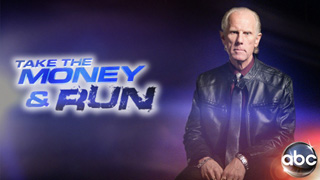 Combining elements of an edge-of-your-seat investigative drama with the excitement of real people in their hometowns attempting to outwit high-level detectives and interrogators, “Take the Money & Run” is an exhilarating competition series that will take reality television to a whole new level.

Detective/best-selling author Paul Bishop (www.bishsbeat.blogspot.com) is a high ranking detective specializing in Sex Crimes for a major metropolitan police department on the west coast, where he has twice been honored as Detective of the Year. He has written numerous novels, as well as scripts for feature film and episodic television. Deputy District Attorney and best-selling author Mary Hanlon Stone (www.maryhanlonstone.com) attended the University of Michigan Law School, then moved to California to join the District Attorney’s Office, where she specialized in domestic violence and sexual assault prosecutions. Her novel, invisible girl, was inspired by the courage of the young girls she has met through her work.

Error: Twitter did not respond. Please wait a few minutes and refresh this page.