Next weekend, you can find some of the most prestigious names in comics at the 2012 Small Press Expo (aka SPX).

Unlike many conventions that are geared toward pop culture or corporately owned comics, SPX was created in 1994 to promote artists and publishers who produce independent comics. SPX hosts an annual festival that provides a forum for artists, writers and publishers of comic art in its various forms to present to the public comic art not normally accessible through normal commercial channels.

It’s one of NBM’s favorite shows and this year we’re proud to bring with us both two talented cartoonists and the debut of our newest title (six weeks before street date!)

Stan Mack will bring his new book, Taxes, The Tea Party and Those Revolting Rebels: A History in Comics of the American Revolution and will be signing throughout the weekend. 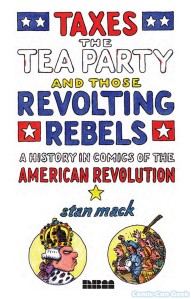 A cartoonist de-mythologizes the Founding Fathers and makes them more ‘like us’”says The New York Times. Uncannily relevant to today’’s world. Learn about the original revolt against taxes: the Boston Tea Party, and the original Occupy movement: the Rebels in revolt against the status quo. A whimsical and informative pictorial history featuring a chubby, insecure King George III, rebellious and misunderstood colonists, loudmouthed and insensitive aristocrats, and more. Updated from the original “Stan Mack’s Real Life American Revolution” published by Avon books in 1994 .

Stan will be appearing at the NBM booth throughout the weekend and can also be found on Sunday at the 4:00 PM panel, Images of America: Real and Imagined  at the White Flint Auditorium alongside Nick Abadzis Dean Haspiel and Ben Towle. Isaac Cates will lead these four artists in a conversation about images of place in comics.

Also joining the festivities is Brooke A. Allen, creator of A Home For Mister Easter, which remains one of comics’ strongest debuts in the last few years.

Tesana has never really fit into anything before but her daydreams. But when making an attempt to connect to her peers by joining in a pep rally planning committee she suddenly discovers a little white rabbit that lays brightly colored eggs. Realizing that she may have found the real life Easter bunny, Tesana embarks on an epic quest in an effort to get him back to his natural habitat and into safe hands. However as she progresses on her fanciful journey she gains more and more undesired attention until the quest becomes an increasingly madcap race to stay ahead of greedy pursuers and find a safe place for her new friend…wherever that place may be. It’s Tesana against the world!

If you haven’t checked it out yet, be sure to pick up a copy at the show.

And finally, we will be premiering Abelard, from artist Renaud Dillies and writer Régis Hautière! 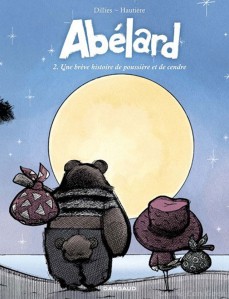 The charm of Renaud Dillies strikes again: after the mouse of Bubbles and Gondola, here is another dreamer, little chick Abelard. To lure pretty Epily, Abelard sees only one solution: to catch the moon for her! So off he goes to America, the country which invented flying machines. Armed with his banjo and his proverb-sharing hat, he launches out on the country roads, meets Gypsies, then Gaston, a grumpy bear with whom he will share a good bit of his way… As opposed to dreamer Abelard, Gaston has his feet firmly planted on the ground. With this funny animal road-movie where the absurd becomes poetry, Régis Hautière and Renaud Dillies offer us another small jewel.

Throughout SPX, NBM can be found at tables A8-A9. For further details, visit the SPX website, www.spxpo.com