David Marquez adds to the Marvel mural on July 11!

The Palm Restaurant in San Diego is about to get Marvel-ous with the appearance of ULTIMATE COMICS SPIDER-MAN artist David Marquez! Celebrating this year’s Comic-Con International, Marquez will add to the restaurant’s famous Marvel comic book mural (already featuring art by John Romita Sr., John Romita Jr., Simone Bianchi, Mark Brooks, Leinil Yu, Humberto Ramos and more) as he draws Miles Morales, better known as the all-new Ultimate Comics Spider-Man at 4:00 PM PST on Wednesday, July 11. Stop by for food, drinks and a chance to see David work his magic as Marvel commemorates their sixth year of making history with the Palm! The Palm Restaurant is located on 615 J Street in the heart of San Diego’s entertainment district! 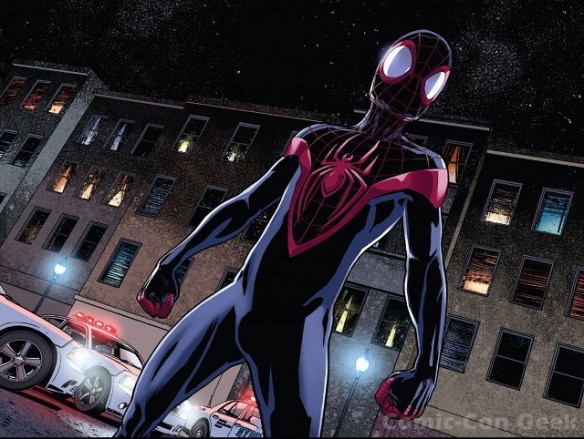 Can’t make it to the convention? Follow along on the Marvel Events App & events.marvel.com, the best way to get exclusive videos, real-time announcements from the convention floor and up-to-the-minute panel, in-booth, and signing schedules of all your favorite Marvel creators!

As part of Dark Horse’s recently announced Marvel Syrocos program, it is announced today that these highly anticipated statues will make their debut at next month’s Comic-Con International in San Diego! 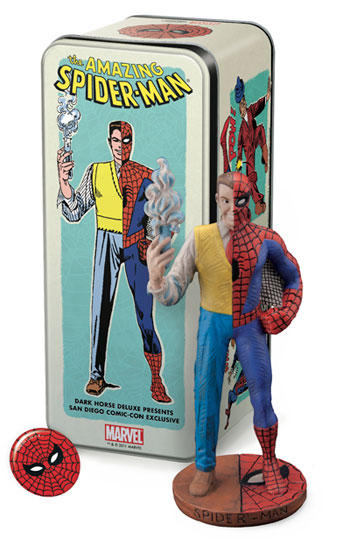 Comic-Con attendees will have a very significant opportunity to acquire a special statue of none other than Spider-Man. He is shown as half Peter Parker and half Spider-Man. Only one thousand numbered copies of this statuette are being offered. It is packaged in the same litho-printed tin box that is the hallmark of the Dark Horse Syrocos, and seems destined to be a bona fide hot item, both at Comic-Con and far beyond the exhibit hall. It will be sold at the normal retail price of $49.99, with a limit of four per customer.

“We couldn’t think of a more appropriate venue to launch this truly collectible series than Comic-Con,” Dark Horse product development VP David Scroggy remarked, “and a Spider-Man limited edition of only one thousand pieces makes this a scarce item. It gave us the opportunity to recall one of the early treatments by artist Steve Ditko, where we see both of Spidey’s identities simultaneously. Our spider sense is tingling, and the message is a quick sellout at the show.”

As previously announced, the program will begin in September 2011 with two alternating series: Classic Marvel Characters and the Fantastic Four. This new line will be deliberately different than the common modern Marvel collectible sculpture, with features like a rougher surface texture, visible seam lines, and other slightly “distressed” aspects, such as the method of paint application.

These special Comic-Con exclusives will be available at six p.m. on Wednesday, July 20 at the Dark Horse booth (#2615). Don’t miss your chance to own one of these fantastic statues!

Hot Toys continues to provide the fans with awesome collectibles. This time they show us a few photos of their New Goblin Limited Edition Collectible Figurine from Spider-Man 3! Check them out below!