For all those that were not able to attend Comic-Con 2013 in San Diego last month, Matty Collector is a having the’r “Most Wanted” Sale on Monday, August 5th starting at 9:00am. The Early Access for subscribers was today for 4 hours, so hopefully there are some items left for everyone else to grab if you missed out! Good luck!

The Con is gone, but here’s your chance at some of the awesome products we had at SDCC this year! All the details are right here…

Please note that all products are subject to sell-out to subscribers during Early Access* on Friday 8/2. Any remaining products will be available to everyone starting Monday 8/5 at 9am PT.

…and other stuff you may want!

*Early Access is a subscriber-only benefit through our clubs. Subscriptions are closed for 2013, but if you want to make sure you have the chance to purchase many of our hottest items before non-subscribers in 2014, get your 2014 subscription today!

DYNAMIC DUO SPRINGS BACK INTO ACTION!
WARNER BROS. TELEVISION AND TV GUIDE MAGAZINE RETEAM TO DELIVER FANS THE ULTIMATE COMIC-CON® SWAG ITEM: A SPECIAL EDITION OF THE MAGAZINE DEVOTED
EXCLUSIVELY TO PROGRAMMING FROM THE STUDIO

The 88-page special issue is packed with features and photos dedicated to the following programs:

And there’s more! Including: 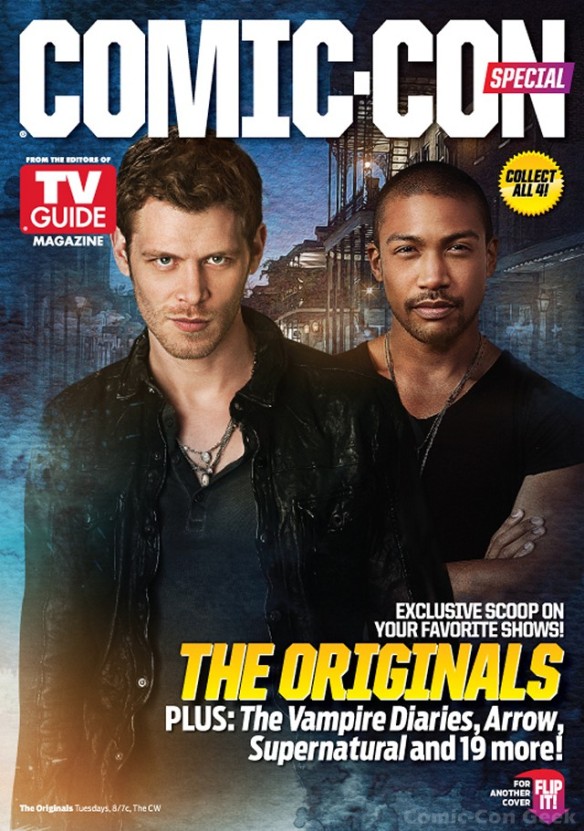 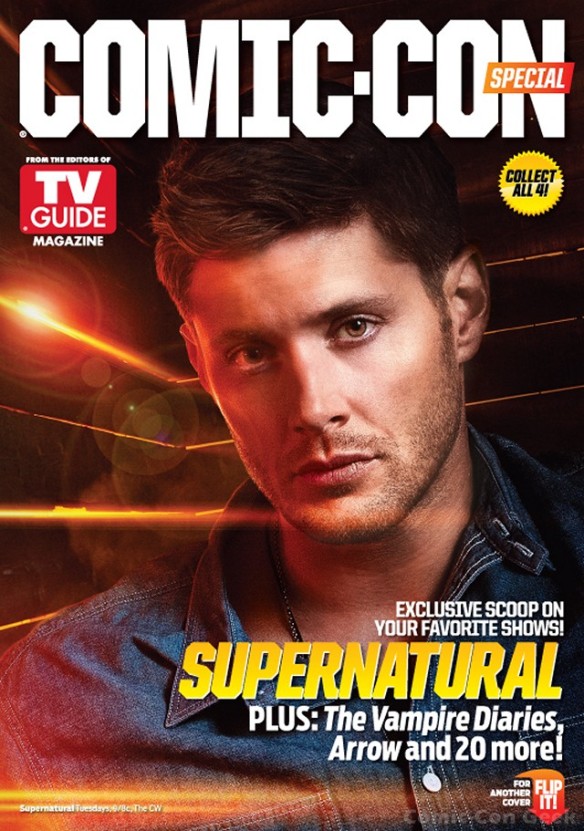 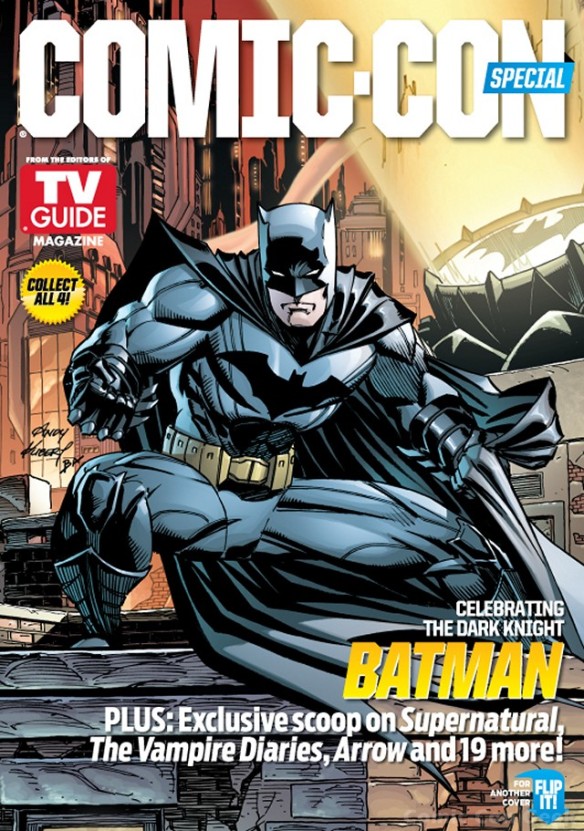 DC Collectibles have released four San Diego Comic-Con exclusives. The first one is Aardman‘s Superman and is priced at $24.95 and is packaged with a “box of cookies”.

The next exclusive is actually three collectibles from Cartoon Network‘s DC Nation animation block. The Super Best Friends Forever three-pack (Supergirl, Batgirl and Wonder Girl) will be $49.95 and is designed by Lauren Faust.

The Hugo Strange action figure will be also available for all the gamers out there for $29.95. The figure is based on the evil scientist from Batman: Arkham City.

The fourth exclusive is the “Superheroes of Green Lantern” four-pack which will be $49.95. The figures are 3¾-inch in height and features the Black Hand, Red Lantern Dex-Starr, Sinestro Corps Arkillo and Green Lantern Sinestro.

These items will be available at Graphitti’s booth at Comic-Con (and probably DC’s online store after Comic-Con).

Hot Toys is teasing everyone with a couple of photos of their figures for Superman and Jor-El.

One of the most anticipated blockbusters this summer, Man of Steel will begin to hit theaters worldwide next month! Audience will get to take a new look at the origin and rise of an iconic superhero. We know that fans have been eagerly waiting, and we are very excited and happy to inform you today that the collectible figures of Man of Steel will be coming soon! 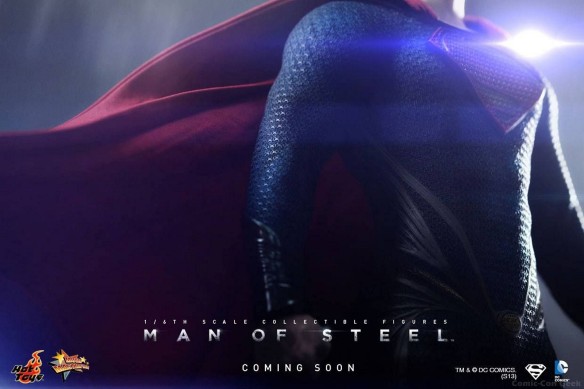 Three ornament designs will be sold in limited quantities at Comic-Con International, to be held July 18-21 in San Diego, Calif., and at New York Comic Con, set for October 10-13 in New York City:

More information about Hallmark’s plans for these fan events will be announced closer to the respective dates.

About Hallmark Cards, Inc.
Hallmark makes the world a more caring place by helping people express what’s in their hearts and spend time together – a privilege few other companies in the world enjoy. Hallmark greeting cards and other products are found in more than 39,000 retail outlets in the United States, including the network of flagship Hallmark Gold Crown® stores. The brand also reaches people online at Hallmark.com and on television through Hallmark Hall of Fame original movies and cable’s top-rated Hallmark Channel. Worldwide, Hallmark offers products in more than 30 languages available in 100 countries. This privately held company is based in Kansas City, Mo., and is led by the third generation of the founding Hall family. Visit http://corporate.hallmark.com for more details.

Warner Bros. Pictures and Legendary Pictures have provided the first look at the new Man of Steel, revealing star Henry Cavill as Superman in the film from director Zack Snyder.

“Man of Steel” is being produced by Charles Roven, Emma Thomas, Christopher Nolan and Deborah Snyder. The screenplay was written by David S. Goyer, from a story by Goyer and Nolan, based upon Superman characters created by Jerry Siegel & Joe Shuster and published by DC Comics. Thomas Tull and Lloyd Phillips are serving as executive producers.

Currently in production, “Man of Steel” is slated for release on June 14, 2013 and will be distributed worldwide by Warner Bros. Pictures, a Warner Bros. Entertainment Company.

Here’s the cover to the 2011 Souvenir Book for Comic-Con! Enjoy!

‘Toon Tumblers revealed their exclusive for Comic-Con. The glass features artwork from Jim Lee and reveals the final Justice League lineup that will be featured in the upcoming DC relaunch. It looks like there are a lot of costume changes too. This image is probably a MAJOR spoiler for many people. Enjoy! 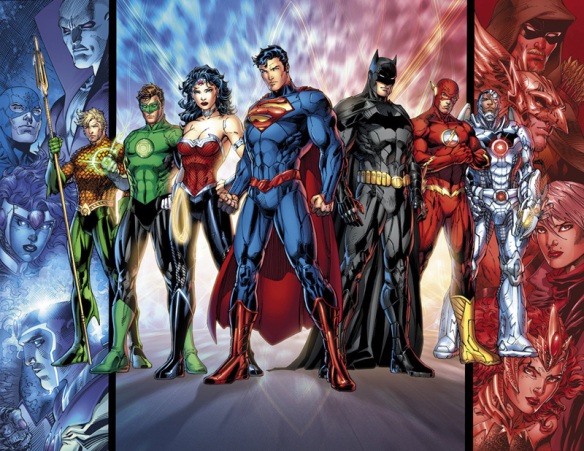