Matty Collector (Mattel) announced San Diego Comic-Con Exclusives Pre-Sale information. Actual exclusives have not yet been announced, other than the 6-inch Batusi Batman figure from the BATMAN Classic TV Series line. Updates will be coming as soon as info is released.

We like you. We really, really like you. So as our way of saying “thank you” for being our loyal customer, we’re taking $4 off the cost of shipping for every order that contains a May release product! The discount applies to all May subscription orders as well as purchases made at MattyCollector.com between 5/15 9am PT and 5/16 9am PT. As long as your order has one of the May products on the list below, you’ll save $4 on shipping. Read on for everything you need to know about our May sale, plus get dates for our SDCC voucher and “Most Wanted” sales…

Everyone’s favorite time of the year is right around the corner! You know we’ve cooked up some serious must-have toys but we’re not ready to show you what they are just yet. We’ll reveal them later this month and tell you which ones will be available for pre-purchase and pick up at the show, which ones are show-only, and those that will be available here on MattyCollector.com. For now, here are the dates you need to know:

Don’t forget… every order that includes a May release product qualifies for a $4 discount on shipping, both subscriptions and orders placed during the regular monthly sale from Wednesday, May 15th at 9 a.m. PT (12 noon ET) through Thursday May 16th at 9 a.m. PT. Want an email reminder? Click here to register. Or, join me on Facebook, Twitter and in our Fan Forums and you’ll get reminders there, too.

The following is from Matty Collector. This sounds like the way to go, to get your exclusives “saved” and purchased in advance for Comic-Con. Good luck! I hope it works out well. REMEMBER: All sales are FINAL, there are no refunds and you MUST pick up your items at Comic-Con!

Awhile back we told you that thanks to great fan feedback in 2010, we’d once again be holding a voucher pre-sale for products to be picked up at SDCC. Those same products (with a couple of variations) will also be available for sale here on Matty Collector.com on August 1st, just like last year. SDCC is barely a month away and all our ducks are lining up nicely, so here are the details (if you participated in these sales in 2010, they’re set up the exact same way so you already know the drill).

Like last year, there’s a limited amount of each product available for pre-sale. It’s first-come, first-served and there are no promises you’ll be able to purchase a voucher for every product. But once you’ve got your voucher, you’re guaranteed to get your product – including Swamp Thing with Un-Men!

Here’s what we’ll have available for pre-sale (click here to see images and read the descriptions):

If you miss this sale or the product you want is sold out for pre-sale, we’ll still have these products available for purchase at SDCC on a first-come, first-served basis.

8/1 POST-SDCC SALE AT MATTYCOLLECTOR.COM
Not going to SDCC? We’ve got you covered! We’ll have limited quantities of your most-wanted products available here at MattyCollector.com on Monday 8/1 at 9 a.m. PT (noon ET). We’re working out the details and will have the final list of products soon but we’ll definitely have everything from MOTUC, Ghostbusters and DCU. Please note that Swamp Thing won’t have the Un-Men and Queen Marlena will be packed as Captain Glenn™ Heroic Galactic Adventurer™, but she’ll still have all the accessories you need to transform her into Marlena.

That’s everything for now! As far as reminders go, I send emails so click here to register and I’ll send them your way. You can also find reminders on Facebook, Twitter, and in our Fan Forums.

29 days, 23 hours, 15 minutes until #WBSDCC — The clock is ticking, and Comic-Con is right around the corner! By bringing 16 series to Comic-Con International: San Diego, Warner Bros. Television Group (WBTVG) further strengthens its presence at the world’s leading pop culture convention — and will deliver a one-of-a-kind experience for fans in the process. The anticipation is building as a star-studded lineup of performers and producers from Warner Bros. Television and Warner Bros. Animation series prepare for a robust schedule of panel sessions, screenings, media appearances and autograph signings.

For continuing info on the Studio’s plans at Comic-Con, please follow us on Twitter @TheWBdotcom, hashtag #WBSDCC, and visit http://www.thewb.com/comiccon

Supernatural: Series stars Jared Padalecki and Jensen Ackles will topline the panel, held this year for the first time ever in Hall H. Additional cast members and executive producers to be announced.

And it wouldn’t be Comic-Con without a visit to the Warner Bros. booth. The Studio will once again have a can’t-miss, nearly 3,000-square-foot destination on the convention floor, at space #4545. Anchored by the iconic Warner Bros. Water Tower, the booth is a must-visit location for autograph signings, multiple interactive kiosks for fans to play video games from Warner Bros. Interactive Entertainment, and much, much more. Stay tuned to @TheWBdotcom on Twitter or http://www.thewb.com/comiccon in the coming weeks for more details about activities at the booth.

WBTVG continues its Comic-Con tradition of hosting a special sneak peek premiere event on preview night. This year, the Studio is offering fans the opportunity to see some of the most anticipated new premieres of the year.

The Secret Circle: The ordinary becomes extraordinary in this romantic drama about a coven of young witches, from The Vampire Diaries executive producer Kevin Williamson, based upon the book series by L.J. Smith (The Vampire Diaries).

Person of Interest: From J.J. Abrams and The Dark Knight co-writer Jonathan Nolan comes an action-packed hour for CBS about an ex-CIA operative and a mysterious billionaire who team up to stop violent crimes before they happen in New York City.

Supernatural: The Anime Series: The popular series Supernatural makes history this summer as the first-ever live-action show to be re-imagined in Japanese anime style. Renowned animation studio Madhouse — working with the full approval of series creator Eric Kripke — produced the anime series, which mirrors the story arc of Supernatural’s first two seasons, providing supplemental stories ranging from prequels and spin-offs to untold tales that fit within the Supernatural mythology.

This show-accurate figure recreates the scene from the pilot episode when Robin, Aqualad, and Kid Flash discover the mysterious Project Kr, where The Light has commissioned “The Weapon.” Using Superman’s DNA – without his knowledge or consent – Cadmus has force-grown the Superboy, using telepathic Genomorph-Gnomes to make a virtual slave of Superman’s son. The cloning tank includes Superboy plus 3 telepathic Genomorph-Gnomes, and with the press of a button, the inside of the cloning tank lights emitting a blue glow.

The Young Justice Superboy in Cloning Chamber will be $20. You will be able to get this exclusive through the voucher pre-sale for pickup at SDCC and for sale at Mattel’s booth at SDCC while supplies last, then on MattyCollector.com on August 1.

Here are some photos of the Young Justice Superboy in Cloning Chamber.

Swamp Thing is a very unique offering for Comic-Con as it come with 2 Un-Men which are only available for Comic-Con. You will not be able to get this on Matty Collector’s website after the convention. He has an awesome sculpt and has no visible joints as they are covery by his rubbery membrane. Also the packing for Swamp Thing doubles as a bio-degradable mask. He will go home with you for $30.

Next up, for the collector is the 6″ Blazing Sword Voltron with Comic-Con exclusive box reciting the show opening — “Voltron, Defender of the Universe!” This Voltron comes with 2 swords. You will be able to pick him up at the convention for $30.

Queen Marlena comes with her royal green dress, scepter and sword. She also comes with an interchangeable space helmet head, rifle and blaster pistol to transform her back into Captain Glenn, Heroic Galactic Adventurer! Finally, Cringer comes with the queen as an added accessory! Marlena is packed as Queen Marlena: Heroic Queen of Eternia for Comic-Con and then as Captain Glenn: Heroic Galactic Adventurer for Mattycollector.com after the convention.

Young Justice Superboy in Cloning Chamber looks like a sure win! He will cost you $20 at SDCC.

This next one is super secret… No available photo of the vehicle yet! Doc Brown must be keeping this under wraps. This exclusive is from the classic movie is from Back to the Future.

Wow, I remember this Franken Berry cereal box! Well, this one is a bit different, it has a Hot Wheels car inside! The popular Dairy Delivery vehicle is what is inside and is yours for $20. Re-live your childhood memories… LOL!

MOTUC Polly Pocket Collection — The set of 3 contain Polly dressed as She-Ra, Kerstie dressed as Frosta and Crissy dressed as the evil Catra!

Next, from Monster High comes Ghoulia Yelps, the smartest ghoul in school, who is on her way to NekroCon dressed as her favorite zombie super hero, Dead Fast. She comes with a miniature Dead Fast action figure and a Dead Fast fan fic book that she wrote and illustrated herself.

Barbie is coming in a special Green Lantern action figure  packaging. She is going to be Carol Ferris, lifelong friend and sweetheart of Green Lantern, Hal Jordan. Barbie will come dressed in her green flight suit and pilot helmet with the Sapphire logo. 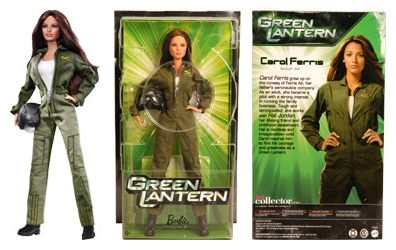 More to come… (It’s getting so busy as it gets closer to Comic-Con!)